Privacy Questions and Answers Regarding the Safer Illinois App

Below, we present questions about privacy and provide an answer for each.

Most users will start in Orange: Potential Exposure. Once a negative test is received from on-campus testing, the status changes to Yellow: Recent negative test and Building Entry changes to Allowed.

The COVID-19 status color code was decided by the Champaign-Urbana Public Health Department. This is what the color codes mean for you in the Safer Illinois App: 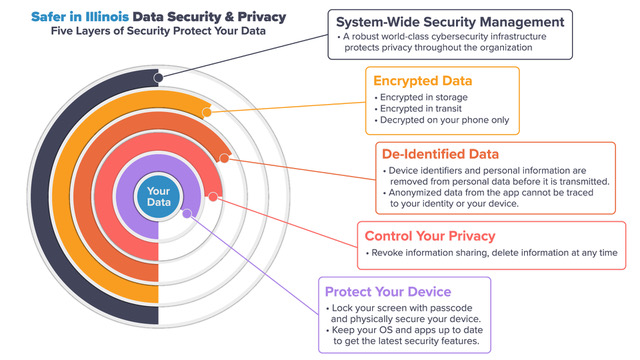 The University uses industry best practices in data security to minimize risks to user personal data through data loss, misuse, unauthorized access and unauthorized disclosure and alteration. All user data is protected against unauthorized access or distribution. User personally identifiable information (PII) will never be shared with third parties without user permission. Users can delete all personally identifiable information (PII) and all anonymous data from our servers at any time by using commands within the Illinois App.

There are different types of data stored and transmitted from the Safer Illinois App.

When users of Safer Illinois elect to receive their diagnostic test results through the app, the results are transmitted from the health care provider in charge of the tests. (On UIUC campus that provider is McKinley Health Center.) The notification is encrypted in transit and decrypted on the user’s phone. The test result is also saved in an encrypted form in our secure database in case users need to access their data from a new device. No other party but the user can decrypt the test result. The Illinois app will not share an individual's test results information with anyone.

The laboratory that conducts the test is required by law to submit all test results to the Illinois Department of Public Health, which is managing the response to the epidemic. Summary statistics of testing data are shared with the public on a dashboard. These statistics are used to manage the COVID crisis on campus and may be used for research in the future.

Contact tracing is a public health procedure used to identify people who may have come into contact with an infected person. Public health workers who conduct contact tracing interview known infected individuals, attempt to find all recent contacts with the infected individual, and then follow up with those contacts by recommending testing, quarantine, treatment or other measures.

One reason to have location tracking of infections is that it would be very useful in curbing infection hotspots or super spreader events. But we are unlikely to offer location tracking in the Safer Illinois app unless we can do it in an anonymous fashion, so that we're not sharing any individualized data, in order to protect privacy.

No. The Safer Illinois app will be used only for the following functions: (1) Connecting with health care providers to receive test results and care recommendations, (2) Self-reporting of symptoms, (3) Opt-in Exposure Notification, (4) Enter/Do Not Enter status for campus buildings, (5) Recommended steps for improving and maintaining the user’s health, (6) Simplified up-to-date county public health guidelines. The Safer Illinois app does not report geo-location, so it cannot report or track a user’s whereabouts.

The Safer Illinois app will not retain PII (personally identifiable information) for long-term study. The Exposure Notification data expires automatically after 14 days and is not saved anywhere. De-identified non-PII information such the following may be archived and made available for the public welfare and for research in the future:

No. The Safer Illinois app, and all of its features, will be retired when the Illinois Department of Public Health declares that the Covid-19 epidemic is over. All individual-level data associated with the Safer Illinois App will be deleted at that time. Note that individual users can remove all of their data from the system whenever they choose to do so.